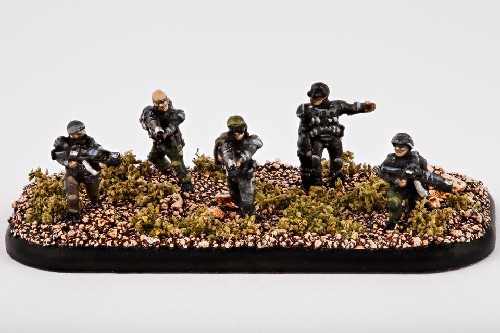 Almost every Resistance fighter can be considered a veteran, especially when compared to their fresh-faced counterparts in the UCM Legions. These people have lived their entire lives under enemy occupation and fight with grim determination, often holding their ground against impossible odds.
Despite this mental toughness, their combat effectiveness can be considered broadly equivalent to those in the Legions. Ultimately, they are not trained soldiers and they tend to sport a wide variety of outdated kit of mixed vintage and pattern. A lot of their gear is handmade and somewhat lacking compared to their high-tech counterparts.
Their primary weapon is normally the pre-war A12 Infantry Rifle, a fantastically reliable if unspectacular weapon, featuring basic digital sighting and a distinctive sickle shaped high capacity magazine. Fighters are often equipped with homebrew single use RPG’s, which make up for their lack of punch in numbers and the coordinated fire of multiple users.

6 Resistance Fighter Stands per blister
Base Size: 45x22mm
10mm Scale
Five Pewter figures and one base each