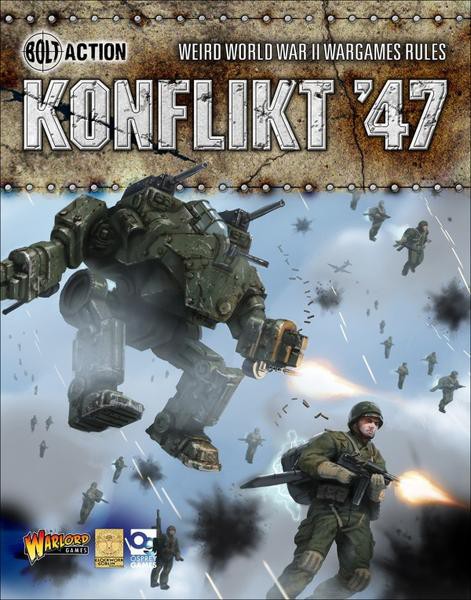 Written by Chris Hale and with fantastic artwork by Jon Cave and Russ Charles this mighty 208 page rule book contains the complete background and rules to play 1947 weird WWII with your Bolt Action forces.

As World War II continues beyond 1945, the battling countries have become even more desperate to develop new super weapons to give them a winning advantage. Exploiting new technologies revealed from the first nuclear explosions, the Axis and Allied forces quickly develop new tanks and strange armoured walkers to become the vanguard of their armies, supported by new highly equipped or terribly twisted troops. With the Soviet Union seceding from the Allies the war now becomes a three-way conflict!

Konflikt ’47 is a standalone game inspired by the hugely successful Bolt Action, designed by Clockwork Goblin Miniatures and produced by Warlord Games and Osprey Publishing. Adding to the core rules that many gamers are familiar with from Bolt Action, Konflikt ’47 allows the addition of completely new types of units and models to existing 28mm Bolt Action armies and the creation of completely new forces set in the alternate future of 1947.

Konflikt 47 introduces ‘Weird War’ weaponry – including the stunning range of walkers and other mechanical monstrosities!