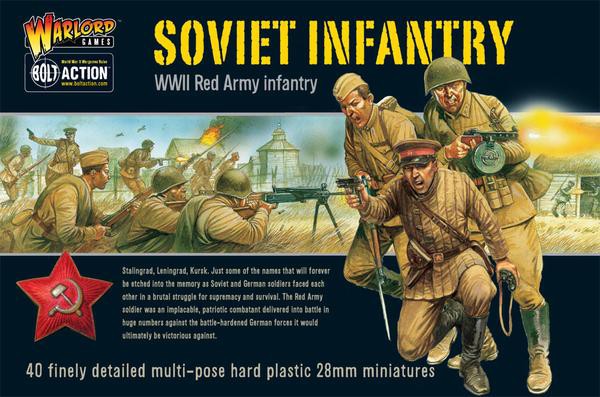 These are the men who fought ferociously to defend Mother Russia from the German invasion of 1941 through to the fall of Berlin in 1945. Simple peasant soldiers, they were taught to obey orders and do as they were told. Their life was hard and their battles probably unequalled in history for scale and suffering.

The Russian divisions grew from a disorganised mass to a fully capable and experienced force of modern infantry in just a few short years, a deadly weapon tempered in the cauldron of battle against the German invaders.

"Quantity has a quality of its own" said Joseph Stalin, alluding to the huge numbers of men he could put into the field. Well-equipped with simple, solid weaponry the Soviet soldier was a terror in attack and the very devil in defence as the legendary sieges of Leningrad and Stalingrad hold in stark testimony.

This box gives you a platoon of grim Russian infantry with a variety of equipment and weaponry. Assemble your men, fix bayonets, look to your front and don't let the Commissar see you lag behindǃ