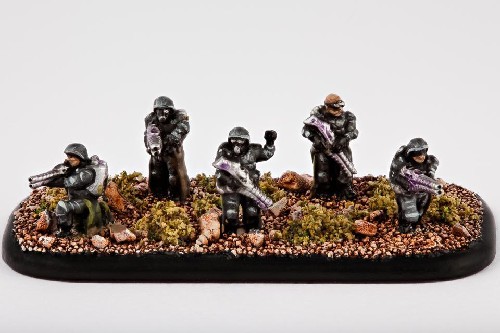 Even among the toughened fighters of the Resistance, there are battle hardened individuals who have survived the crucible of combat and beaten the odds time and time again. These elite warriors are provided with the best kit available regardless of expense.
Since they have been on the receiving end of Scourge weapons on countless occasions, they have a grudging respect for the superiority of the aliens’ technology. Rather than cower before it, they generally choose to turn the enemy’s weapons against them! As such, these so called ‘Occupation Veterans’ are normally equipped with looted Scourge Plasma Rifles and power backpacks.
Although any human can simply pick up and use a Plasma Rifle (since they were designed for human hosts)the supply is limited. Most Resistance attacks are hit and run and there is seldom time to search the bodies of the fallen. Also, human use of the weapons has a major limitation in that no one has figured out how to reenergise them. Armourers have made the best of this situation though by deliberately overloading the weapons. Such actions wear down and destroy the guns extremely quickly, but not usually before they run out of power, after which they are simply discarded as useless paperweights. These modifications grant Occupation Veterans extended range, making them some of the most dangerous ranged infantry on any battlefield today.

4 Occupation Veterans Stands per blister
Base Size: 45x22mm
10mm Scale
Five Pewter figures and one base each