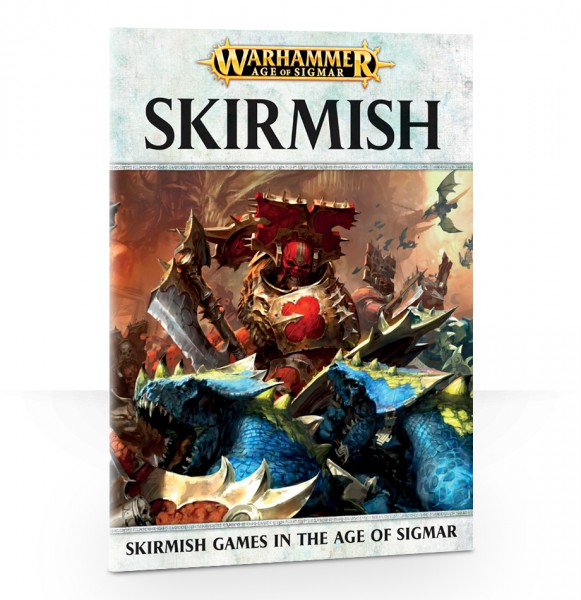 - A set of simple modifications for the core rules of Warhammer Age of Sigmar that introduce skirmish battles – small-scale, intense fights between anything from a trio of models to a marauding band of fifteen models and upwards;
- Details of battling in skirmish formation – models fight as individuals, rather than groups, meaning each model is treated as a single unit. This alters the way certain effects and abilities work in a subtle way, and emphasises fast, aggressive, tactical gameplay;
- The General: each player chooses a general from the Heroes in their warband, who can use a command ability, artefact of power, and three new wizard spells from the tables supplied in the Skirmish rules;
- Battleshock: again, tweaked from the core Warhammer Age of Sigmar rules to encourage fast, brutal gaming, Battleshock can turn the tide of war in a single dice roll – you better hope your general is stoic in the face of slaughter!
- All-new command abilities, artefacts of power and mysterious terrain rules;
- Clarification regarding summoning and generation of extra attacks and hit rolls in Skirmish games.

Included in the book is a linear narrative campaign, pitting two - or with some judicious tweaking, more – players against each other in a series of brutal skirmishes as your warbands fight bitterly over the incredible treasures of Shadespire. This campaign comprises six Battleplans representing a story from the murky dawn of your warbands’ first day on the outskirts of Shadespire, through to the climactic battle that decides the outcome of the whole campaign.

Between games, your warbands can earn and spend renown – the more renown earned, the more glory-seekers will join your general on his quest for treasure – and discover Rewards of Battle: charms, glyphs and relics that enhance the abilities of your warband in new and interesting ways.

The true test of a general’s mettle is the meeting of equally-matched warbands, where tactics and strategy outweigh sheer numbers when deciding how the battle ends. This book contains a guide to putting together your own Matched Play Skirmish battles, with included points values allowing you to assemble matched warbands from models representing each of the four Grand Alliances. Any Battleplan from the General’s Handbook can be used in a Skirmish Matched Play game.

Please note, you’ll need a copy of the Warhammer Age of Sigmar core rules (available as a free download) to use this book.